Meet matcha, the current darling of the tea world. This finely milled green tea powder — the staple ingredient upon which traditional Japanese tea ceremonies were built in the 12th century — has seen a surge in popularity recently thanks to its visual appeal, purported health benefits, and beautiful, distinct flavor. Matcha is essentially processed green tea leaves that have been stone-ground into a delicate powder. The powder is then sifted and whisked with hot water. Because of the laborious process required to produce matcha, the tea is generally pricier than others.

Matcha leaves are grown in a number of places and, in fact, the practice of milling tea leaves into a fine powder and then whisking in water originated in China around the 10th century. Beliefs are that the only place to source is Japan and the most popular growing regions are in the southern half of the country: Uji, Nishio, Shizuoka, and Kyushu. What most distinguishes matcha from other green teas is that matcha bushes are covered for up to 20 days prior to harvest to shade the leaves from direct sunlight. This is done to boost the plants' chlorophyll levels (which turns the leaves a darker, vibrant shade of green), and increase the production of L-Theanine, an amino acid that occurs naturally in the tea plant and certain types of mushrooms. Notice how tea has a tendency to both calm and stimulate at the same time? That’s thanks to L-Theanine.

Workers only pick the best buds, and depending on whether the leaves are rolled out flat before drying or whether they are laid out to dry will result in two different green teas. If the leaves are rolled out they become a premium green tea named Gyokuro, while the leaves that are laid out to dry become Tencha. Tencha is the leaf used for making matcha. Once the leaf is de-veined, de-stemmed, and stone-ground it becomes the fine powder known as matcha. 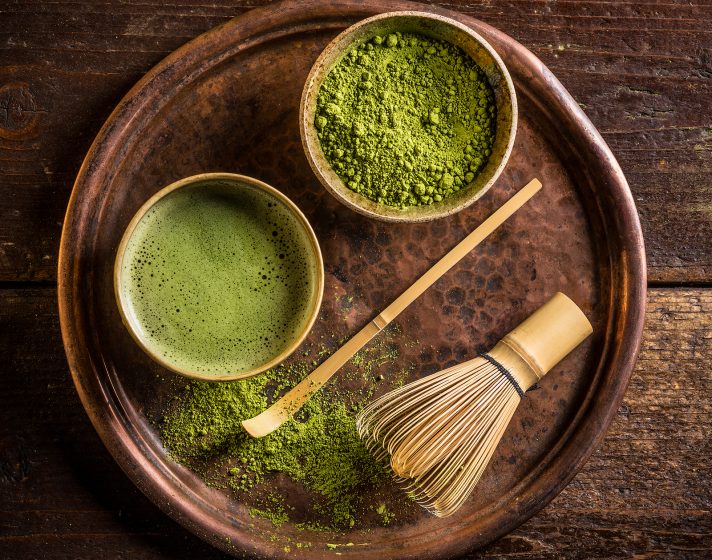 In contrast to contemporary matcha culture (it's as easy as grabbing a green tea latte from a nearby Starbucks), traditionally, Japanese tea ceremonies (called chanoyu) centered around the preparation and offering of matcha. Where everything counts. From the beautiful hand-painted matcha bowls made by local artisans to the art of serving and receiving the tea.

Matcha is usually made in two forms: usucha and koicha. Usucha translates to "thin tea," and is the most common preparation. Generally what cafes and restaurants serve. Koicha is "thick tea." It’s made with half the amount of water and twice the amount of matcha powder as usucha. Instead of quickly whisking, the tea is gently kneaded using the chasen or bamboo whisk. The result is a very thick (imagine the texture of paint) tea. Koicha is usually prepared during traditional tea ceremonies and is made from the highest quality of matcha powder. As compared to usucha which is made from the second highest grade of matcha powder. And the matcha powders used to make usucha and koicha can’t be simply interchanged.

To prepare usucha, matcha powder is sifted into a bowl and whisked with hot water until frothy. The entire tea leaf is consumed in contrast to "regular" tea, which is a brewed beverage of processed tea leaves steeped in hot water. Matcha is also tea. But instead of a brew, it is a suspension. The matcha powder is whisked and suspended in the water. Let that bowl of matcha sit for too long and it will separate unlike a brewed/steeped beverage.

Equipment is an essential part of the experience and key to making great matcha. Start with a chawan, the tea bowl which is used to make and drink the matcha. Also necessary is chashaku, a traditional bamboo tea spoon used to scoop the matcha into the chawan. Also important, the chasen, and a tea sifter to break up all the clumps, which develop because of static in the matcha powder.

The flavor of matcha depends on the quality of powder used and the region from which it comes.

Start by using the chashaku. Sift a teaspoon of matcha powder into a chawan. Gently pour in three ounces of 175°F water. Using a chasen, whisk rapidly in an MW/zig-zag motion until frothy. The result is a hot, frothy (the goal is to get only small bubbles on the surface, not big ones) concoction that is all at once sweet and grassy, occasionally with a hint of bitterness. The flavor of matcha depends on the quality of powder used and the region from which it comes. Some prefer matcha that is a touch sweeter, others might prefer a more umami-rich matcha. There are clear distinctions between good and bad quality matcha (powder that tastes unpleasantly bitter), but once a powder is in the realm of good and above, it’s primarily about personal taste preference.

In addition to drinking matcha both warm and cold, there's no shortage of creative uses for the powder: infused into cocktails, whipped into lattes, dusted atop savory dishes, and mixed into any number of sweets from macarons to mochi, and cakes to doughnuts. The naturally sweet, grassy notes adapt well to food and drink making it a memorable flavor to showcase in a wide range of creations.

Matcha has also recently been making waves in the health and beauty sectors because the green tea leaves are believed to be high in antioxidants. Regular steeped green tea is considered healthy because the leaves contain antioxidants, but water can only extract a small about of the leaves' nutritional properties. In the case of matcha, one consumes the entire leaf, making it exponentially more healthful.

Matcha consumed in America is done so in a causal way. But keep in mind the traditional Japanese tea ceremony from which the matcha ritual stems. At its root is the notion of mindfulness and ichi-go ichi-e ("one time, one meeting"), the idea that every encounter is unique and can never be reproduced. In terms of drinking tea, this means that each particular occasion and experience, each cup of matcha, can never be replicated and should thus be treasured.

Head on over to order your matcha  by Matcha Universe now.